Preorder Untethered Sky and submit the receipt by April 10, 2023 to receive a signed bookplate and laptop sticker! 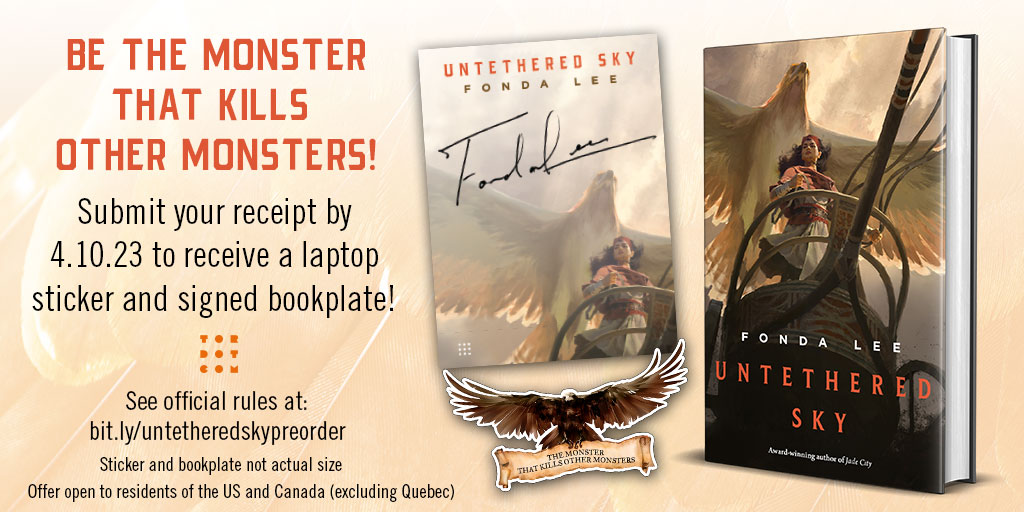 Last year, I was approached by Shannon Lee, the daughter of Bruce Lee, who asked me if I would be interested in collaborating with her to write a series of young adult fantasy novels inspired by her father’s life, writings, and philosophy. Bruce Lee is such an influential figure to me, so of course, my answer was a resounding yes. I’m excited to share the news that the Guardian of the Scroll duology has now sold to editor Mara Delgado-Sanchez at Wednesday Books, for publication in 2024 and 2025.

Jade Legacy A Finalist for the 2022 Dragon Award

Jade Legacy is a finalist for the 2022 Dragon Award for Best Fantasy Novel! The Dragon Award is voted on by any and all fans and is handed out each year at DragonCon in Atlanta. See the full ballot here, and register to vote for you favorite science fiction and fantasy works of the year.

Behold the stunning cover for Untethered Sky, releasing from Tordotcom on April 11, 2023. Artist Jaime Jones did a wonderful job of capturing the partnership between the main character, Ester, and the roc that she trains to hunt manticores. Here’s a bit more about my upcoming novella, from the cover reveal announcement:

Ester’s family was torn apart when a manticore killed her mother and baby brother, leaving her with nothing but her father’s painful silence and a single, overwhelming need to kill the monsters that took her family.

Ester’s path leads her to join the King’s Royal Mews, where the giant rocs of legend are flown to hunt manticores by their brave and dedicated rukhers. Paired with a fledgling roc named Zahra, Ester finds purpose and acclaim by devoting herself to a calling that demands absolute sacrifice and a creature that will never return her love. The terrifying partnership between woman and roc leads Ester not only on the empire’s most dangerous manticore hunt, but on a journey of perseverance and acceptance.

Untethered Sky is now available for preorder wherever books are sold.

I’m stunned and honored by the news: Jade Legacy has won the 2022 Locus Award for Best Fantasy Novel! Thank you to Locus Magazine and all the readers who voted for my work. The full announcement of all the deserving winners and finalists can be found here.