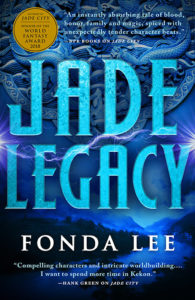 The Kaul siblings battle rival clans for honor and jade in the epic conclusion of the World Fantasy Award-winning series, the Green Bone Saga.

Jade, the mysterious and magical substance once exclusive to the Green Bone warriors of Kekon, is now coveted throughout the world. Everyone wants access to the supernatural abilities it provides, from traditional forces such as governments, mercenaries, and criminal kingpins, to modern players, including doctors, athletes, and movie studios. As the struggle over the control of jade grows ever larger and more deadly, the Kaul family, and the ancient ways of the Kekonese Green Bones, will never be the same.

Battered by war and tragedy, the Kauls are plagued by resentments and old wounds as their adversaries are on the ascent and their country is riven by dangerous factions and foreign interference. The clan must discern allies from enemies, set aside bloody rivalries, and make terrible sacrifices… but even the unbreakable bonds of blood and loyalty may not be enough to ensure the survival of the Green Bone clans and the nation they are sworn to protect.

“Blood, loyalty, and lives are gained and lost in the powerful finale of the Green Bone Saga. Lee’s series will stand as a pillar of epic fantasy and family drama.” —Library Journal (starred review)

“In both meeting and subverting expectations at every turn, Lee guides her cast to a deeply satisfying, well-earned conclusion.” —Publishers Weekly (starred review)

“Lee’s Green Bone Saga is The Godfather with an Asian cast, Game of Thrones in a suit, tie and sunglasses. It has all the earmarks of a modern, international gangster epic juiced with boardroom intrigue, economic theory and swordfights.” —NPR, Best Books of 2021

“One of the greatest fantasy series I’ve ever read…Fonda Lee is a master of her craft, and this will be a trilogy on her resume that will essentially give her placement rights among the greats of modern fantasy.” —Daniel Greene

“Jade Legacy caps off the epic Green Bone Saga, living up to the trilogy’s unique genre-bending framework…Lee does a stellar job of keeping the book as character driven as the rest of the series.” —Booklist

“Jade Legacy is excellent, exactly what it needs to be as a third book in a big-ticket trilogy. Scope, character, cultural and technological change over time, generational differences, action, tragedy, and comedy create a sweeping and majestic story that is also grounded absolutely in people’s lives.” —Kate Elliott