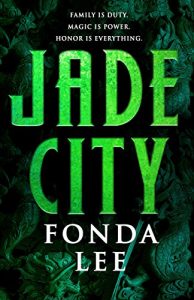 FAMILY IS DUTY. MAGIC IS POWER. HONOR IS EVERYTHING.

Jade is the lifeblood of the island of Kekon. It has been mined, traded, stolen, and killed for — and for centuries, honorable Green Bone warriors like the Kaul family have used it to enhance their magical abilities and defend the island from foreign invasion.

Now, the war is over and a new generation of Kauls vies for control of Kekon’s bustling capital city. They care about nothing but protecting their own, cornering the jade market, and defending the districts under their protection. Ancient tradition has little place in this rapidly changing nation.

When a powerful new drug emerges that lets anyone — even foreigners — wield jade, the simmering tension between the Kauls and the rival Ayt family erupts into open violence. The outcome of this clan war will determine the fate of all Green Bones — from their grandest patriarch to the lowliest motorcycle runner on the streets — and of Kekon itself.

Jade City begins an epic tale of family, honor, and those who live and die by the ancient laws of jade and blood.

“Stylish and action-packed, full of ambitious families and guilt-ridden loves, Jade City is an epic drama reminiscent of the best classic Hong Kong gangster films but set in a fantasy metropolis so gritty and well-imagined that you’ll forget you’re reading a book.”―Ken Liu

“Fast cars, brilliant characters, and gangster kung-fu! Lee’s written the postcolonial Godfather hiding under the surface of the Avatar: the Last Airbender universe ― and it’s a fantastic read.”―Max Gladstone

“Jade City has it all: a beautifully realized setting, a great cast of characters, and dramatic action scenes. What a fun, gripping read!”―Ann Leckie

“A fast-hitting, tantalizing, sometimes unsettling, and always insightful book with a wealth of power at its core. A modern-day epic.”―Fran Wilde

“A modern classic…Fonda Lee handles each thread with skill and style, weaving a story that feels as intimate as it does epic.” ―Nicholas Eames

“Dynamic fight scenes and vibrant world-building bring to life this sharp, memorable story of a family caught up in a ferocious gang war.”―Kate Elliott

“Dragged me through by the scruff of the neck. What a ride! I love this book.”―Steven Brust

“A sweeping saga of ambition, loyalty, and family.”― Tina Connolly

“Exquisite writing, explosive fighting ― Jade City is as rich and deadly as the Green Bones warriors who stalk its pages.”―Heidi Heilig