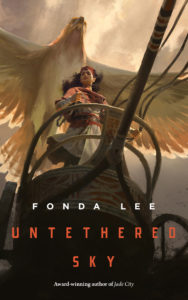 From World Fantasy Award-winning author Fonda Lee comes Untethered Sky, an epic fantasy fable about the pursuit of obsession at all costs.

Ester’s family was torn apart when a manticore killed her mother and baby brother, leaving her with nothing but her father’s painful silence and a single, overwhelming need to kill the monsters that took her family.

Ester’s path leads her to the King’s Royal Mews, where the giant rocs of legend are flown to hunt manticores by their brave and dedicated rukhers. Paired with a fledgling roc named Zahra, Ester finds purpose and acclaim by devoting herself to a calling that demands absolute sacrifice and a creature that will never return her love. The terrifying partnership between woman and roc leads Ester not only on the empire’s most dangerous manticore hunt, but on a journey of perseverance and acceptance.

Suitable for teen and adult readers.